A Welsh man has issued a public call to help find two Irish men who helped him return home from Australia in 1965 by packing him up and mailing him in a crate. 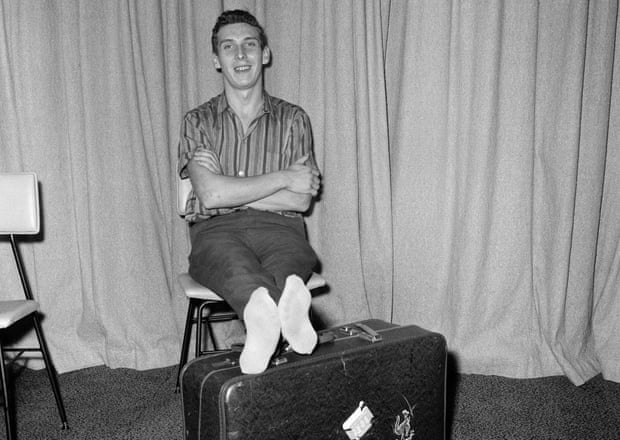 Brian Robson, a 75-year-old from Cardiff, is looking for two men he only knew as Paul and John.

Robson was a 19-year-old working for Victorian Railways when he became homesick. But the airfare would have cost about £700 and he only made £40 a month, he told the Irish Times.

So he came up with a “stupid” plan, to buy a small wooden crate and have himself sent as freight. Robson said the “quite horrific experience” had taken four days, and he had been repeatedly stored upside down.

Nearly 60 years later, Robson said he wanted to get in touch with the men to thank them and to buy them a drink.

“I’m 99% sure that they were called Paul and John,” he told the Irish Times. “Paul really was 100% against it … but John said, ‘Don’t worry about it, I’ll persuade him.’ And so, they both went ahead and helped.”

Robson bought a box “the size of a mini-fridge” and packed it with pillows, a suitcase, a book of Beatles songs and two bottles – one for water and one for urine. His friends then nailed it shut and booked Robson as cargo on a Qantas flight from Melbourne to London.

But their plan came unstuck. The flight was full, so Robson was transferred to a PanAm flight that instead took him to Los Angeles.

A newspaper report from May 1965, written by Reuters and Australian Associated Press, said Robson had labelled himself “a computer”.

The then-acting minister for immigration, Leslie Bury, said the Australian government would not take any action against him, after another MP, Dan Mackinnon, called for legal proceedings against “this apparently useless young man”.

The prime minister, Robert Menzies, when asked if custom officials should be looking more closely at outgoing crates said: “They could use a geiger counter.”

In the US, Robson was discovered by startled customs officials and then interrogated by the FBI.

He told the BBC that a man had “looked through a hole in a wood knot in the chest and we caught each other eye to eye”.

“He jumped back a mile and said, ‘There’s a body in there.’”

After questioning, he was cleared and flown to London on a regular passenger flight, before resuming his life in the UK.

AAP reported at the time that Robson had to “push his way past well-wishers” who greeted him at LA airport, and had still been “stiff and limping” when he flew to London.

Robson said he had written to the men to thank them but they never responded.

“We got on famously,” he told the Irish Times. “They used to come to my bedsit, or I would go to see them, almost on a daily basis.”

But he admitted to the BBC that ultimately the crate escapade had been “stupidity”.

“If my kids tried it, I would kill them. But it was a different time.”

“If you trust in yourself, and believe in your dreams, and follow your star. . . you'll still get beaten by people who spent their time working hard and learning things and weren't so lazy.”
Top

And I thought your Australia to Wales journey home story was interesting.
Top

I remember that story. Those were the days of £10 assisted immigration from UK to Australia. Of course you were on your own - as he was - if you got fed up and wanted to go back home. I don't recall if the £10 (around $40 then) got you a plane ticket or a boat ride.
Top

I id d a quick search and there are a number of articles under the heading 10 Pound POMS which describe the program; it looks like a lot of people were effectively trapped in Australia and could not afford to return.
Top

One of the saddest tales I've heard, was told to me by an old boy, one who I met on a visit back to Wales from Aus.

As a youth he'd heard about the "ten pound Poms" deal, and not having any commitments, decided to give it a go.

He'd sold everything he owned to make the money, and headed down to Southampton.

When he got there he had an attack of homesickness, and just couldn't get on the boat.

He'd returned to Llanelli, tail between his legs, and spent his whole life wondering how things would have turned out if he'd gone.
“If you trust in yourself, and believe in your dreams, and follow your star. . . you'll still get beaten by people who spent their time working hard and learning things and weren't so lazy.”
Top

For of all sad words of tongue or pen, The saddest are these: "It might have been!"
Top
Post Reply
6 posts • Page 1 of 1