There aint half been some clever bastards.
Post science, nature, technology and all geek stuff here.
Post Reply
6 posts • Page 1 of 1

Look at these symbols — 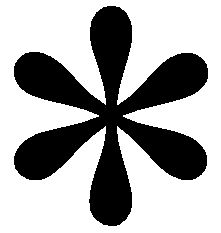 Turns out we've been wrong all along.  Back in 1975, a US patent (#3,829,926) was granted in which these two symbols were named, respectively, the octothorp and the sextile.
(scroll down to page 7, first column, of the .pdf)

So ... a little edumacation for you today.  You're welcome.

That sounds like it should be.....oh, you know damn well what it sounds like!
People who are wrong are just as sure they're right as people who are right. The only difference is, they're wrong.
— God @The Tweet of God
Top

Not sure where octothorp (does it have something to do with 8?) came from, but I recall (from a friend in college who was really into astrology) that the asterisk was used to describe certain relationships among stars in the sky--I think it has to do with the angles between them, and since it contains the term "sex" I am assuming that it relates to an angle of 60 degrees (1/6 of 360 degrees)--there were other symbols for other angles (like quartiles) as I recall, but why they phone people wouldn't just call it an asterisk i beyond me.

Of course, it may not have anything to do with that--as I recall the beginning of Ben Casey used the asterisk as the symbol for birth in the "Man, Woman, Birth (asterisk), Death (Cross), Infinity" recitation before the theme song.
Top

Since the first character has a total of four lines, resulting in eight end points, I assume that's where the 'octo' part of the word comes from.  And following that same line of logic, there are six points in the asterisk — so there's where they got the 'sex' in 'sextile'.

Of course, i wasn't there, so I don't know that for a fact.  But it makes a certain amount of sense when you look at it like that.

As for your friend who was into astrology, are you sure he wasn't talking about an asterism (a recognizable group of stars, but NOT a constellation — think of the three stars that make up the 'Belt of Orion' in the constellation of the same name, for example, or the 'Big Dipper', which is only a portion of the full constellation Ursa Major) rather than an asterisk?

And I have since found out that this patent expired (and was not renewed) back in 1992, so I guess we can call them whatever we want to again.

Just what was patented? I am sure the California job case I used for Caslon back in high school print shop in the '50s had both symbols. One was used for the pound sign (rather than lb) and the other was used for footnotes.

I didn't read it too closely but it appears to be for a telephone which can be used to transmit data and voice (novel in 1973, when it was filed); the identification of the characters is just an aside.
Top
Post Reply
6 posts • Page 1 of 1