There aint half been some clever bastards.
Post science, nature, technology and all geek stuff here.
Post Reply
2 posts • Page 1 of 1 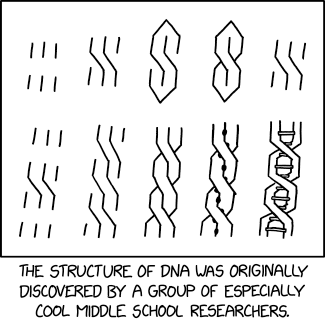 This has to be one of the funniest cartoons Randall Munroe has done in a long time.

Anyone who knows the story of the DNA molecule and its structure and its importance in understanding genetics knows the main characters: Jim Watson, Francis Crick, Rosalind Franklin and Maurice Wilkins. In popular accounts, these four are usually typecast as the rowdy American with barely discernible morals; the genius; the dowdy bluestocking (and IMO nothing could be further from the truth) who was treated shabbily by her some of her male colleagues (there is quite a lot of truth in that); and the fourth man who stole Franklin's work.

In the late sixties - we were so innocent then and it seems like another world - Maurice Wilkins led the effort in Britain to establish a group of scientists who were opposed to war (WW2 was still recent and VN was full throttle) and who wanted science to address issues like poverty, disease, pollution, waste of resources etc. I don't think climate change was on our radar in those days. I established the country's first student chapter at my university so I worked closely with Dr Wilkins (I never called him Maurice) to get students involved.

Wilkins was a shy, diffident man. Personally charming and obviously very bright, but in a roomful of people he would merge into the wallpaper. In modern accounts of the DNA story, Wilkins is the one who stole Franklin's 'Picture 51' - the famous X-ray crystallography shot - and showed it to Watson which gave him the aha! moment he needed to understand the structure of the molecule and how it reproducibly contained the codes for protein manufacture. But those who have carefully researched the events and relationships of the time have shown that Wilkins thought he was Franklin's research adviser and Franklin did not know this, because the lab chief at the time was uncommunicative at best and wanted an easy life among some fragile egos. And in the mores of the time (this was long before scientists had $$$$$ at the heart of their research) the data belonged to the group. I was doing research (not DNA - the occurrence of mercury in seawater and marine sediments) a few years later and my lab boss was perfectly free to say and did say, at conferences and public seminars, 'one of my guys thinks that . . . ' (I recently read an account of CRISPR, a gene editing technique for which Jennifer Doudna and Emmanuelle Charpentier won the 2020 Chemistry Nobel [The Code Breaker by Walter Isaacson - a great read] and I was astonished by how every time they made some discovery along the way there was a rush to patent the technology and form companies to exploit it. Plus ça change . . .)

I'll tell you a story about Wilkins. He wanted to come to my university to talk to our group - there were then perhaps 10 of us - about how to spread the message among students. I mentioned this to my professor - I probably wanted him to join us for the talk. He was horrified to find out that the great Maurice Wilkins, DNA Nobelist, was coming to our little university and nothing had been laid on in his honor. So he arranged some sort of faculty cocktail reception for after Wilkins' session with us. I picked Wilkins up from the railway station to take him the 4 or 5 miles out to the Uni. I didn't have a full license but I was learning. I had my then girlfriend's Renault Dauphine which we had bought for £12 (maybe $30 in those days) and by law she, a fully qualified driver, had to sit in the front with me so we bundled Dr Wilkins into the back. Dauphines were known rustbuckets and it was not unusual to finish a journey in the rain with wet feet. We made it out there in one piece, had our meeting, and I delivered him to the reception. "What time do you want me to pick you up, Dr Wilkins?" I asked. "It's OK thanks, you don't need to hang around for me, I'll just get a taxi." Told you he was smart.
Top
Post Reply
2 posts • Page 1 of 1